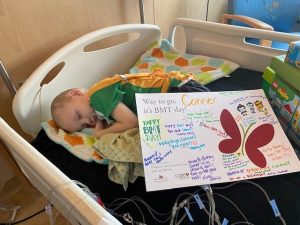 The pandemic has been even more stressful for the Finn family.

In mid-June, four-year-old Conner was diagnosed with a rare, sometimes fatal disease known as cerebral adrenoleukodystrophy (ALD), which affects about one in 18,000 people.

“We understood that time is of the essence. We have to get him in and get him treated as quickly as possible. We can’t wait weeks, months (or) years for treatment,” his father Craig said.

An MRI showed the disease was quite advanced and Conner’s parents felt they needed to make a quick decision in order to help him.

Doctors at the ALD and Leukodystrophy Centre in Minnesota said Conner was in a small window for a bone marrow transplant, which has been used to help slow the disease.

Craig said the province gave his family an option of getting the transplant in Winnipeg or Toronto, but there was no clear timeline or an ALD specialist to treat him.

He and his wife cashed out their retirement and savings in order to cover the upfront costs of the treatment in Minnesota.

“I don’t think they really understood that every day that Conner waited, his brain continued to deteriorate,” Craig said.

He added the transplant alone cost about $1 million CAD.

“When you have one of these disabilities, even with today’s bone marrow transplant or any other innovations, we don’t regain that lost ground. we’re really trying to halt progression in these children,” Dr. Troy Lund said from his office in Minneapolis.

The family requested a financial partnership with the province, looking for the funding they would receive if they opted for the transplant north of the border.

The Ministry of Health said it can’t speak about specific cases.

In a statement to Global News, it said all care options in Saskatchewan and Canada must be exhausted and that it doesn’t offer partial payment for services.

It went on to say services done without approval aren’t eligible for reimbursement.

A GoFundMe campaign has been set up to help the family.

“He has his good days and when he has his bad days, he’s got a big smile on his face and he’s playing cars again as if nothing is going on,” he said.

The family expects to stay in Minneapolis for a few more months for regular medical appointments and will have to continuously check in with the ALD and Leukodystrophy Centre over the next few years.